The Father of Orthodoxy

Saint Athanasius was one of the great leaders of the early Church. During the fourth century there were many great men and women of faith, but none of them did more to further the cause of Christ than this diminutive bishop from Egypt. Trying times require the best of men and the best from men, and that is exactly what the Church got in St. Athanasius. At a time when the Church faced the most insidious heresy of all, one man rose above all others to combat it, and combat it he did. On several occasions his great struggle for the truth brought him near to martyrdom. But instant martyrdom was not to be God’s will for his life. Instead, he was to spend the fifty years of his adult life in a courageous, bloodless, martyrdom, tenaciously fighting for the true Christian faith.

For the last seventeen centuries every generation of Christians has given St. Athanasius praise. Athanasius was as true a champion of the truth as ever lived. He stood tall for the faith when others withered. He did not flinch even from the threats of emperors. For a time it seemed that he was battling alone against the whole world (thus the famous Latin phrase: “Athanasius contra mundum”). To those who know about his life, even the very mention of his name stirs the soul.

St. Athanasius was the Patriarchal Bishop of the Church of Alexandria and of all Egypt. In this office he served for four and half decades. As a youth he endured the greatest persecution the Church had ever seen. As a bishop he fought against the greatest heresy of all time. Throughout all these years, St. Athanasius remained an indefatigable soldier of God. Though short of stature his wonderful life and great deeds have cast a very long shadow.

Saint Athanasius was born in the year 298 A.D. in Alexandria, Egypt. From infancy he was raised by devout parents in the ways of the Christian faith. When he was only five years old, the great persecution under Diocletian began. It lasted for ten years. What would have been the normal years of his youth were swallowed up in the struggle for survival. Terrible things happened. Churches were desecrated and destroyed. Christians were brutally persecuted. The faithful were imprisoned, tortured, and killed in horrible ways. No persecution before had ever been so widespread or so systematic. In the year 313 A.D. the persecution finally came to an end when Constantine the Great became the first Christian Emperor. Christians then went from being persecuted by the government to being favored by the government. During that same year Pope Alexander was consecrated as the new Patriarch of Alexandria. The teenage, St. Athanasius soon came to his notice. The Bishop was impressed with the young man and decided to personally take him under his wing. Pope Alexander guided his formal education, and also served as his mentor in the things of the Church. St. Athanasius grew in wisdom and knowledge, and in due time he was ordained to the diaconate. Following his ordination, Pope Alexander appointed him to be his personal archdeacon.

For awhile the Church enjoyed a much needed peace, but this peace was not to last. A new scourge soon came upon the faithful. This time the attack came not from outside the Church, but from within. The new scourge was a heresy called Arianism. It was started by a priest of Alexandria named Arius, who promoted a theology that departed from the ancient faith of the Church. He taught that Christ was not the divine and eternal Son of God the Father, but merely a created being. Those who embraced his heresy were called Arians. Their byword became: “there was a time when he was not.” In other words, they believed that there was a time when the Word and Son of God did not exist.

Though Arianism was condemned by Pope Alexander and the bishops of Egypt, it continued to grow and spread. Eventually, the first Ecumenical Council of the Church was called to deal with it. In the year 325 A.D. over three hundred bishops, along with many other clergy, gathered at Nicea in Asia Minor. Though only a deacon at the time, St. Athanasius played an important role in the proceedings. At the Council the bishops pronounced Arianism to be a heresy and they reaffirmed the true faith of the Apostles. This affirmation was summarized by the Council in the famous statement of faith known as the Nicene Creed. In addition, Arius and his followers were condemned. However, this was not to be the end of the Arians.

In the year 328 A.D., Pope Alexander died and St. Athanasius was chosen as his successor. As the new Patriarch of Alexandria and Egypt, he worked zealously for the good of the Church. He became the staunchest defender of the truth that had been proclaimed at Nicea. The Arians understood fully that the Patriarch was their principal foe, and they worked feverishly against him. In time, through intrigue, lies, conspiracy, and threats, they gained a following with hierarchs and civil authorities in the East. Eventually, they even persuaded the Emperor Constantine to send St. Athanasius off to exile in Gaul in the year 335 A.D. This exile was to be the first of many. In the decades to come, he would be exiled on five separate occasions for a total of seventeen years. The Patriarch spent the rest of his life fighting against the Arians. In the end, thanks to God, the theology of Nicea prevailed. For his life-long defense of the truth, St. Athanasius is called the “Father of Orthodoxy.”

During his lifetime, St. Athanasius wrote several books. His work On the Incarnation is one of the best ever written on the subject. He was just nineteen years old when he wrote it. Many of his works were penned to counter the Arian heresy. These included the History of the Arians and the Defense Against the Arians. The most famous of his writings during his lifetime was the Life of Antony. His biography of Saint Antony, the great desert ascetic, was a “best seller” of the day. This book did much to promote the cause of monasticism. Indeed, St. Athanasius always had a special place in his heart for the monastics, and they for him.

St. Athanasius’ entire life was one of complete dedication to God. He strove mightily for the faith and never wavered in the cause for truth. His life and deeds remain as an example of self-sacrifice and loyalty to God. Through his efforts, Arianism was overcome and the true Christian faith was preserved. For this, every Christian owes him a debt of gratitude. St. Athanasius was one of the greatest fathers of the early Church. His legacy, like a beacon of light, has continued to shine throughout the ages. 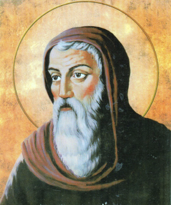 An Excerpt from Champion of Truth: The Life of St. Athanasius
By Fr. Michael E. Molloy